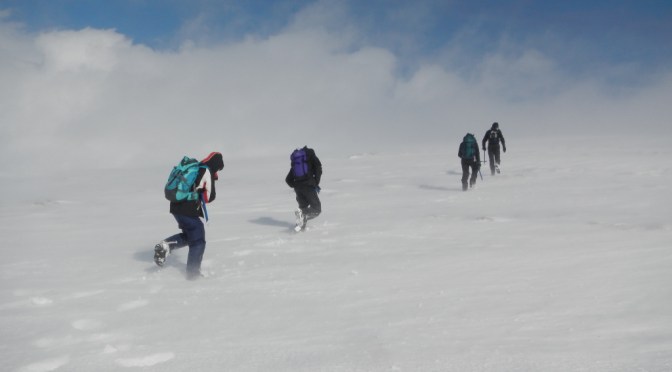 After a physically undemanding day yesterday, we decided to take the group on a full mountain day this time. As we’d driven across to Dalwhinnie yesterday, we’d noticed that the Monadhliath area was looking particularly white so, after a quick check of the avalanche forecaste, it didn’t take long to choose our destination.

Driving up a lane heading north from Newtonmore wasn’t as straight forward as I would have hoped. The snow was falling quickly again, laying on the track and making it hard to tell where the edges were. The ditches on both sides were a good clue, when they could be seem, but a reminder of the consequences of getting it wrong. Parking at the end of the track was a relief, but left me with a nagging concern about what it might be like when we returned to the vehicle in 6-7 hours time!

After all the time spent on navigation yesterday, we handed as much responsibility to the group as possible as we continued North on foot through the deepening snow. Knowing that we would need to cross the stream at some point, everyone was looking for an appropriate set of stepping stones to get across dry – the last thing you want is wet feet at the start of a long day on the hill.

A bit of local knowledge got us across and the group took us off on a bearing for the bothy which occasionally revealed itself through the cloud and snow. As we approached the bothy, we were welcomed by an Arctic Hare who finally concluded he wasn’t going to scare us off as he headed up the hill behind.

The bothy provided some welcome shelter from the wind and snow and a chance to talk through the issues relating to their use and preservation. Exposing ourselves to the elements again, goggles were in serious use as we started out on a bearing in very limited visibility for much of the time. We found ourselves  following the Artic Hare tracks to start with – at least he knew where he was going in this weather! The group on the other hand ended up drifting off to the left, further away from the summit of A’ Chailleach. Glimpses of visibility helped them realise their mistake (with a little help).

By now, the going was getting pretty difficult. Navigation was testing, visibility was limited, the wind was knocking everyone around and the deep powder underfoot meant some very tiring wading at times and turn taking to break trail at the front.

Once in the col to the south west of the summit, things became easier under foot. The wind had scoured all the loose snow, leaving a hard snowpack for the last 600m to the top. We were treated to some fantastic views across the Monadhliath mountain range during some occasional breaks in the cloud but, after some hastily taken photos at the summit cairn, it was time to head out of the hostile wind and back down to civilisation.