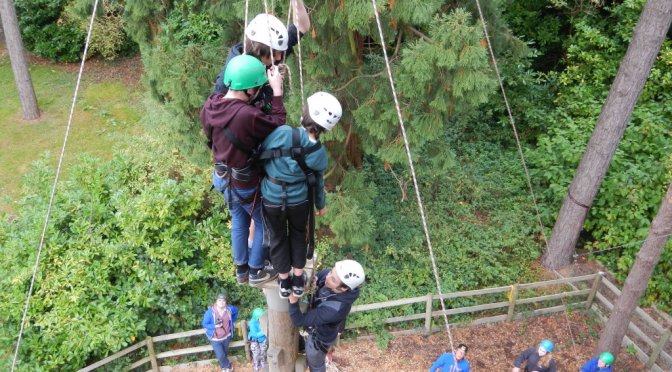 It's been a busy few days at the Adventure Rope Course this week. I quite often find myself working with small groups as the only instructor, so it makes a nice change when we have large groups. This time we had 7 groups of 10-12 students from Priory School in Shrewsbury come to the Rope Course on Wednesday, and another 6 groups on Thursday. Fairly … Read More »

It was a busy day for me at the Adventure Rope Course, just north of Shrewsbury, with a combination of a family and group of boys this morning and a girls party this afternoon. It meant an early start to get down there and get everything set unready to go. With little idea of what the families would want to do, it meant getting everything … Read More » 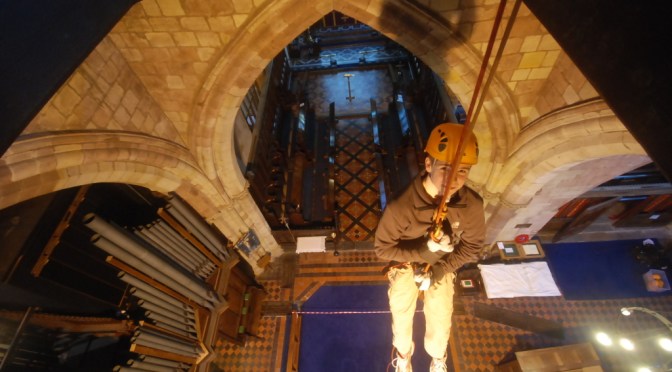 For the last few years I've been involved with annual sessions at the Adventure Rope Course for the girls from Shrewsbury High School that have been doing their Bronze Duke of Edinburgh award. In the past, the session has been used as a post expedition treat after all their hard work. However, this year the school decided to come earlier in the term and use … Read More »

The temperature may have been hovering at around zero today, but 21 members of the Royal Military Police based at Donnington Barracks in Telford came across to spend the day at the Adventure Rope Course. Having been instructed to do some adventurous training, but then forced to pay for it themselves due to cutbacks, I was expecting a degree of resentment from the lads today. … Read More »

Haper Adams is an agricultural college based in Shropshire. Many of their courses have an influx of foreign students for the final year of the course, especially from China. For the last several years, staff from the college have brought these final year students to the Adventure Rope Course as a vehicle to break down barriers and integrate the students from different language and cultural … Read More »

Today, I found myself back at the Adventure Rope Course, and it was nice to spend the day with the kids and staff from the Madeley Academy. This is the third consecutive year that I've worked on this end of term treat day, and it's nice to see some of the old faces returning each year. Due to the number of kids eager to have a … Read More »

This afternoon, we hosted 49 girls from Shrewsbury High School at the Adventure Rope Course. The visit was a reward for the successful completion of their Bronze DofE assessed expedition, which they managed to complete yesterday. As a result, there were some fairly tired looking girls among them, and a few aches and pains as well. With the numbers involved, we had 5 groups rotating between … Read More »

This afternoon, I had the great pleasure of joining Tara to celebrate her 13th birthday at the Adventure Rope Course. With a group of friends in tow, we'd arranged to spend a couple of hours having some fun on a variety of activities where the girls could work together. Due to the recent strong winds we've been experiencing across the country, I arrived good and early … Read More »

Birthdays are usually a great day, especially when you're a kid, and it's a privilege to be asked to help make it a memorable day. Today was Giles' big day and he took the opportunity to bring some of his friends to the Adventure Rope Course near Shrewsbury. In total, there were 9 in the group which worked very well for the activities they tried. We … Read More »