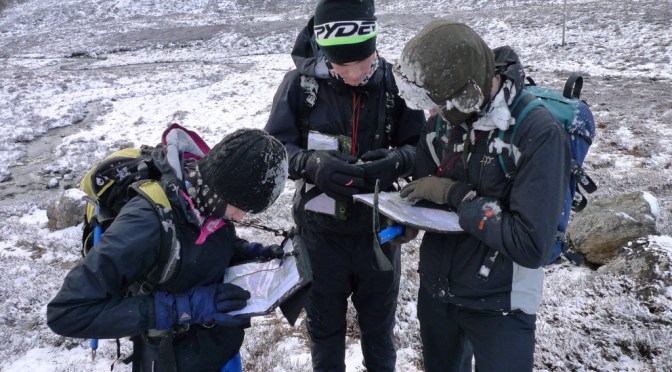 Over ther last couple of days, we’ve had a day of winter skills and a full on winter mountain day to put things into practice. With extremely high winds forecast for today, we opted to head into a lower, more protected, area just north of Dalwhinnie for a navigation day.

Starting on the track that follows the Allt an t-Sluic, we took the opportunity to practice a bit of measuring distance from the map and using pacing in the real world. By the time we reached the remote dwelling, the snow was falling thick and fast and, with the wind driving it into our faces, visibility quickly became limited and goggles were a must.

The route of the track has clearly been changed in recent years and, after following the stream for a while, we soon realised we were too low and waded through steep long heather in search of an established track. The driving snow made it difficult and uncomfortable to look straight ahead and, consequently, it became easier to miss navigational features. However, it gave us the chance to look at contour shapes and particularly re-entrants to keep track of our progress.

A split in the stream provided an ideal attack point to make our way into a broad saddle which, with the poor visibility, wouldn’t be that easy to see. From here, we made our way up the east ridge of Meall nan Eagan, stopping fairly early for our first bite to eat during a lull in the storm.

We contoured round to the south flank in search of a wide ring contour, then using the aspect of slope to confirm our position before heading to the top. The summit was pretty exposed to the wind, so we found a sheltered spot to get out the group shelter for a lunch break.

Asking the group to take us from the top to the 584m spot height had interesting results. After studying the map and, in theory, knowing where they were going, we headed off at about 90 degrees in the wrong direction. A short descent through some deep powder drifts brought us into a saddle where a small cornice had formed on an outcrop of rock, providing an ideal opportunity to talk about their dangers and look at ways of dealing with them.

The group took responsibility for finding our way back and, other than a few questionable route choices, they did a very good job of it. It was easier to find the main track coming from the west and it became apparent that it had probably been rerouted around the house which earlier made it look like a private drive.

On the final stretch along the track, we spent some time working out everyone’s pacings and practicing the skill and the arithmetic that comes with it. Normally, I prefer to do this near the start of the day to give plenty of chance for application but conditions didn’t really allow for this today.

Hostile conditions don’t make for the best of learning environments as it becomes hard to concentrate, but I was pleased with what we managed to covers during our navigation day. I guess we’ll just have to see how well they apply things tomorrow.