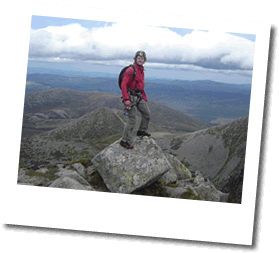 Scrambling lies somewhere on the scale between Hill Walking and Rock Climbing – it could be described as hill walking with frequent use of your hands. It’s a great way to get off the popular routes and feel as though you actually climbed a mountain rather than walked it.

Scrambles are graded according to their difficulty and exposure, but we just concentrate on the lower end of the scale, where most people with a head for heights are comfortable.