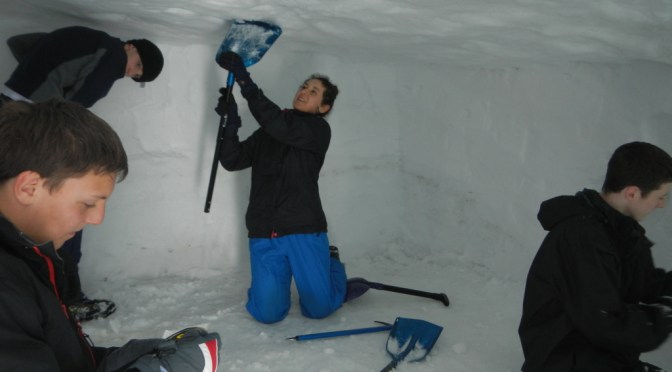 We’ve enjoyed 4 days in and around the Aviemore area of the Scottish Highlands. It’s been a great trip with the group getting to experience a wide range of winter mountain experiences, and developing some useful skills along the way. We generally like to finish the six days off with an expedition of some sort. It’s often 3 days accessing a remote peak but, when more appropriate it becomes 2 days with one night out.

I’ve been hoping for the right conditions for an expedition by snow hole for the last few years. You need plenty of snow and sub zero temperatures to make sure your accommodation doesn’t sag overnight, and this combination isn’t that common in April when Spring is trying to arrive. However, things are just right this year.

This expedition was always going to be about the experience of sleeping out in the snow near the top of a mountain. It wasn’t about getting to the top of a remote peak, or covering big distances. So, after a lengthy checking of kit and some lessons on packing an expedition rucksack, we started our walk in from the Coire na Ciste car park, heading south east towards Cnap Coire na Spreidhe.

After the hostile weather that had been thrown at us for much of the week, it was a pleasant surprise to be ascending in bright sunshine. Jackets and warm layers were being shed in favour of sunglasses. The only concern was the rising temperature and the possible consequences of a warming snowpack.

On arrival at our destination of Ciste  Mhearad, the group were excited to see the evidence of a pre dug snow hole or two and wasted little time in exploring them and staking claim to a few. In contrast, the Colonel was more than happy to sit back and oversee proceedings from comfort of his specially constructed veranda.

Some home improvements were deemed necessary and the guys set to work on expanding their accommodation and installing some mod cons. The 2 snow holes they chose were close by with one slightly higher in the snow bank than the other, and it didn’t take long to develop the idea of connecting them with a staircase. Due to some corrections being needed to avoid the two ends of the staircase failing to meet in the middle, it morphed into a spiral staircase. However, the steps were soon removed, leaving a spiral slide which kept everyone amused!

After a decent evening meal, and with the weather still stunning, we decided to drag everyone the final 800m to the summit of Cairngorm to watch the sunset over the Cairngorm National Park – beautiful. With the light failing as we returned to our snow holes, everyone was ready to turn in for a night as the group tried to work out how to get roll mats and sleeping bags into their waterproof bivi bags without getting everything covered in snow in the process – a delicate operation.

Most seemed to get a good night’s sleep, and with a decent breakfast inside them, I was surprised at how quickly everyone got themselves organised and ready for the walk out. However, rather than heading out the way we came in, we descended to the south east into Strath Nethy which we followed out to the north towards Bynack Stable and round into the Glenmore Forest ready for tea and cake on our return to civilisation.

After waiting a couple of years for the right conditions, I’m delighted that we managed to give the group the chance to experience something as unusual as a night in a snow hole. I doubt many of them will ever do it again, but it’s one of those things they’ll never forget and I’m sure will enjoy telling their children and grandchildren all about it in years to come.