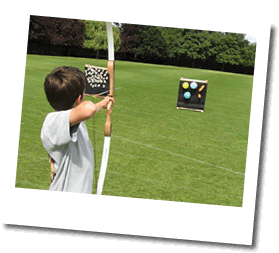 Originally developed as a means of hunting, archery holds a significant place in British history due to the infamous reputation of the English Longbow. Since those Medieval times, archery has grown into a massive sport in its own right.

It’s relatively easy to shoot an arrow at a large target but takes practice, concentration and self control to develop consistent accuracy. As a result, archery is an activity that caters for a range of different personalities and goals. From those with a competitive streak that want to be the best they can, to those that simply want to enjoy the experience, each can approach it in their own way.

We don’t have our own archery range, but make use of others and create temporary ranges in areas large enough to do so safely.

We often make use of established ranges at the Adventure Rope Course and Ellesmere College (when available). However, in theory, we can set up a range anywhere where we have permission, anough space and can stop people from walking behind the targets!