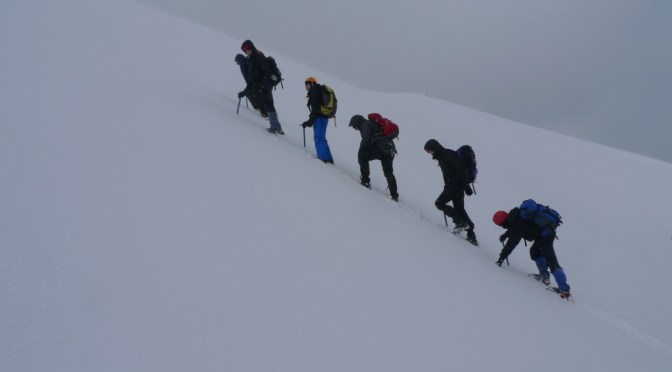 After introducing the group to some basic skills yesterday, we took the opportunity to get in a full winter mountain day in some perfect conditions.

Once again, we took advantage of being able to drive up to the snow line by using the Coire Cas car park and headed off past Coire an t-Sneachda into Coire an Lochain. Stopping short of the lochans, we spent some time looking at using transceivers, and the group had plenty of practice at using them to locate buried objects/people.

Pushing on past the lochans, we decided to put some of the steep ground skills we practiced yesterday to the test, and make our way up the south west corner of the coire back wall. Although there were areas of thin fresh snow on the surface, the snowpack was generally very firm, making it ideal for using crampons properly, and the group were able to really see the befit of yesterday’s session.

Once at the top of the back wall, we were exposed to some fairly gusty and cold winds, so didn’t hang around before bearing east to the top of Cairn Lochan, where we were treated to fantastic views of the Cairngorm National Park.

A short walk East took us into Coire Domhain where we hoped to find an old snow hole to shelter in for lunch. Although there were none visible, we felt sure there would be something hidden beneath the surface, so started searching with an avalanche. It wasn’t long before we seemed to strike thin air and a short dig soon opened up someone’s old and slumped temporary home.

The final climb to the summit of Cairgorm seemed harder work than it should have done, and the group were pleased to see their first glimpse of the weather station at the top. They were quick to work out where the shelter from the wind was, and seemed to collapse for a tired but happy photo.

Another short leg into Ciste Mhearad gave the group the chance to see a number of pre dug snow holes. I’m quietly hoping that the conditions will be right at the end of the week to stay out overnight in a snow hole, so was keen for them to see a few to understand the design features and get their imaginations going.

We managed to achieve a lot today. A good winter mountain day, taking in the summit of Cairgorm (the first 3000ft mountain for everyone in the group), practiced some valuable skills, learnt about using transceivers and explored a number of snow holes. Not bad for a day’s work!