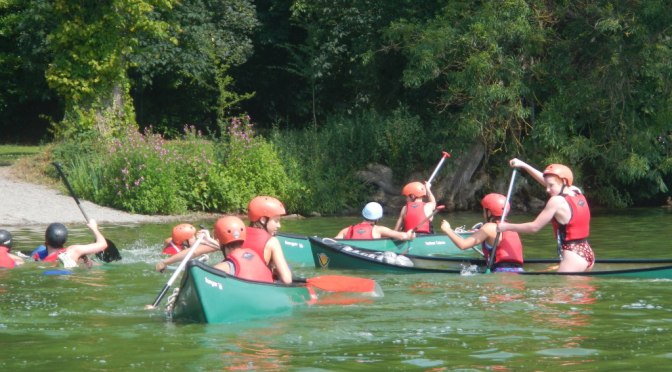 Clearly, swimming all day every day would be too much for anyone and so they look to break the training up by throwing in the occasional activity to relieve the pressure and introduce a bit of light hearted fun. Today, it was the turn of canoeing to be used as a means of entertainment.

Adam, another local instructor and I, met them at the Mere in Ellesmere this morning for a couple of hours of fun on the water. After kitting everyone up with buoyancy aids, helmets and paddles, we got straight on the water to make the most of the fabulous conditions.

I should have seen it coming from a group that are so comfortable in and around water, but I was briefly taken aback by just how quickly the wanted to tip each other in. Their swimming experience and understanding meant that they could control the boats without much problem, so the focus went straight to capsizing others. It seemed silly to fight it, so we quickly created a game of ‘Battle Ships’ which involved 2 teams trying to capsize all of the other team while Adam and I frantically tried to get them back upright and canoeing again. Complete carnage, but great fun.

We also tried a few races, paddling waterlogged boats, paddling over the top of other canoes and a couple of ball games. Paddles got separated from canoes at points and in was interesting to see their responses compared to most paddlers. Normally, people wait for someone else to reunite them with their paddle. These guys wouldn’t think twice about jumping out of their canoe, grabbing a piece of rope attached to the boat and towing the canoe whilst swimming – very impressive (especially when the boat is full of water!)

This was definitely one of the wettest canoeing sessions I have ever run. They seemed to have a great time and didn’t hold anything back – fantastic. Thank you for making it such a memorable morning, and good luck at the Nationals!